In Tanzania, Arusha is known as the land of the Maasai. Due to the huge number of tourists visiting the town each year, the locals embrace both local and modern lifestyles. As a resultis, there are places with many squatters and others with posh houses.

The economic levels in Arusha are quite diverse and comprise activities such as tourism, mining, and farming. The world-famous Tanzanite precious stone is only found in Arusha.

To the Maasai, cattle are seen as precious and life basically revolves around the herds they keep. They are nomadic pastoralists and live in temporary homesteads due to constant movement in search of greener pastures. Their villages are built in a circular shape enclosed in a thorn fence made from a plant known as ‘enkang’. Their houses (inkajijik) are made of dung and mud and are ironically made shorter than the inhabitants. 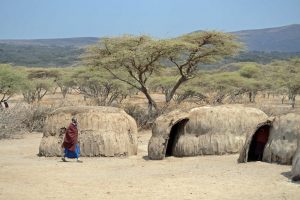 The Maasai are easily identifiable from anywhere in the world due to their iconic red shukas and kanga clothing. Leather sandals made from cattle hides are what they use as footwear, in different designs and styles.

The majority, if not all, of the Maasais, have elongated lobes which they decorate with elaborate beadwork, which they wear on their necks and arms as well, known as shanga.

Young men among the Maasai are taught to be warriors and are known as orinka. They protect the community from wildlife attacks and are the main economists, doing deals on behalf of the community using cattle.

The diet in Arusha mainly consists of meat, fruits, and vegetables. Here are some of the most popular meals in Arusha:

Here are some of the joints where you could find traditional meals in Tanzania:

Arusha, just like any other major tourist destination, is a hotspot for thieves, pickpockets and bag snatchers. However, it is advisable to minimize the impression that you are a newly arrived guest as this will make you a target.

Walk with purpose and in case you need to look at a map, just walk into a shop or a less crowded place away from public scrutiny. These are normal safety precautions if you are a regular traveller.

Get advice from your hotel on dangerous places to avoid. Do not carry valuables or place them in a visible way while driving. At night, always use a cab instead of walking in the dark.

Make sure to visit these places during your tour of Tanzania