The Ezra Power plant, which supplies over 30 000 homes and businesses in Juba with power, is celebrating its second anniversary. The power plant, located in Kondokoro Mangalla County, produces the bulk energy supplied to the Juba Electricity Distribution Company Ltd (JEDCO), the licensed electricity distributor in Juba.

The Group started operations in South Sudan in 2004 and today, Ezra Group Holdings, the parent company of five subsidiaries, is seen as a catalyst for change in South Sudan, where they have committed to building a lasting legacy as they transform the country’s landscape.

It took the Ezra Construction & Development Group (ECDG), a subsidiary of the Ezra Group, just over two years to get the first phase of the plant running after being awarded the contract in August 2017. The Ezra family started doing business in Ethiopia in 1986 and, with hard work, determination and savvy business skills, this small company was transformed into a highly structured incorporated organization in 2003. 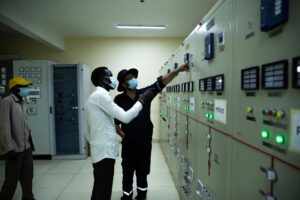 The Ezra Group has created many impressive ventures. Here are some of the Group’s achievements:
Power Plant – One of the Group&#39;s biggest and most impactful ventures has been the construction of the Ezra Independent Power Plant. The first phase of the plant was inaugurated by President Salva Kiir Mayardit on 21 November 2019. ECDG has so far invested US$ 100 million in the Ezra Independent Power Plant, and this figure will rise to over US$300 million once the plant hits full capacity of 100MW. This ground-breaking project was a crucial step in the development of South Sudan.
Upskilling learners and creating opportunities – The Ezra Group also runs an internship and skills development training programme for university students at the Ezra Power Plant in Kondokoro. The project aims to enhance the nation&#39;s productivity through skills development and offer gainful employment for skilled and semi-skilled people.
Building Schools – The ECDG has successfully completed Melut Secondary School under an Engineering, Procurement, and Construction Contract (EPCC) with Dar Petroleum Operating Company (DPOC). The contract was commissioned in 2014 but because of civil unrest was completed in 2018. Thanks to this initiative, children in the community have a safe and stimulating place to develop and learn.
Building Roads – The Ezra &amp; Lubek Construction Company has successfully constructed more than 70km of roads in the Upper Nile region in South Sudan. The Paloch- Adar- Agordeed Asphalt Road Project handled the construction of 40kms of the Adar-Agorded asphalt road, and a maintenance contract for a further 35km of the Poloich-Agorded road.

Building barges – The ECDG is also constructing two large barges to transport crude oil from Upper Nile (Paloch and/ Bentui) to the Ezra Power Plant in Mangalla County. It is more cost-effective to use South Sudan’s crude oil rather than importing it.
Real Estate – The Ezra Group has also successfully ventured into the real estate market, building Ezra Apartments in Uganda. The Group built 32 apartments located in Bugolobi and five double flats in Buziga Kampala, Uganda. The apartments were constructed in 2010 to provide affordable modern housing for customers.

The Ezra Group takes its role as a leader in the South Sudanese business community seriously, which is why giving back to the community and leaving a positive impact is part of its core values.
Some of the Group’s philanthropic ventures include:
– Rehabilitation of the road network leading to the power plant for the benefit of the community
– Sponsoring 3 South Sudanese students into the following universities:
– Prospect University of Juba
– Daystar University, Kenya
– Kigali Independent University
The Group’s second phase of their CSR programme includes the construction of a community hospital in the neighbourhood that hosts the Ezra Power Plant.

“Ezra Construction & Development Group are currently working on the feasibility stage for incorporating solar energy into our energy offerings. This is our plan for 2022.
There are many benefits to integrating solar energy as it will lead to reduced electricity costs and it’s better for the environment.”