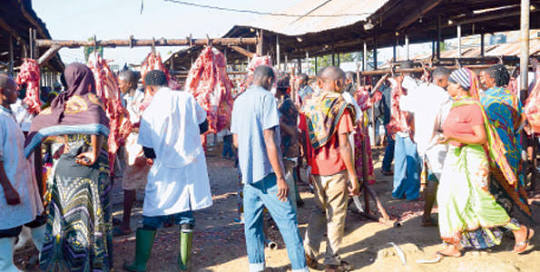 Dar es Salaam is a city that has been in existence for more than a century, with a total population of about 9 million people plus visitors who come and go. Whether you are a Tanzanian resident, temporary visitor or a traveller, you may need a guide to show you around the city so that your stay can be comfortable. Here is your Dar es Salaam survival guide.

Where to do shopping

Dar es Salaam has everything, depending on your needs and requirements, from city centre to deep residential areas. Most of the people living at the city centre are Indians and Foreigners who live in apartmens and national housing flats, leaving the rest of the buildings for offices and businesses activities. If you want to buy something for domestic use, look out for the following places: 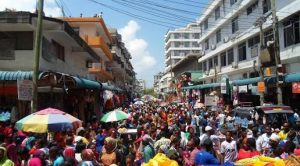 The city centre itself has a few Market centres including Kariakoo that is over than 70 years old. The place started as the military centre during the WW1 era. Currently, more than 20 million people shop here every week.

It is the centre of business for all Tanzanians and neighbouring countries who purchase and distribute imports from the Dar harbour. Every bank in Tanzania has a branch in kariakoo.

Congo street in Kariakoo Market is said to be the longest and busiest in East and Central Africa, accommodating more than 10 million pedestrians every week who seek Machinga to buy cheaper goods, clothes and other accessories. Visit this place to buy your domestic goods, but beware of the noisy and chaotic movements and do take good care of your purse and valuables. 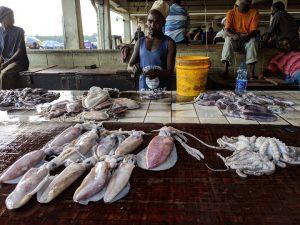 Kivukoni fish market is located at the shores of the harbour Gulf, near Ikulu in Dar.

Most people visit Kivukoni for the fish, but I recommend it to everyone new in Dar.

This is where you will find almost all kinds of fish available in the Indian ocean as well as others from Lakes and Rivers including lobsters, prawns, octopus and crabs. Depending on your budget, you can get all the services you need from the fish market. 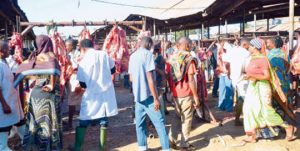 This is a Livestock market. Meat is cheaper here and so if you need beef or mutton for domestic or business use, get it at Vingunguti.

You can also get soup for as little as your budget. It is said even if you have a penny, you’ll get something for it at Vingunguti. Though it is open 24/7, the best time to shop here is between 3:00 a.m to 6:00 a.m.

Mahakama ya Ndizi, Mabibo – For ally types of bananas in tanzania 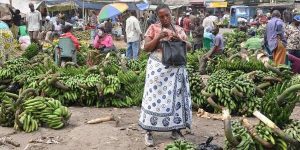 The place is located in Mabibo area, just less than a mile from Morogoro Road.

Unlike other markets, Mahakama ya Ndizi has only bananas and this is what makes it unique.

You can get any kind of banana from Tanzania in this market. Trucks offload some of their bananas here before distributing to the bigger markets like Kkoo, Manzese, Makumbusho and Mbagala.

The Market is close to Mahakama ya ndizi, but starts from somewhere near Morogoro Road to manzese road, a few kilometers from Ubungo Bus Terminal.

Manzese market is said to be the best market for cheap Mitumba (secondhand or used) clothes and sometimes cheaper special clothes and khangas produced from the country’s local industries. 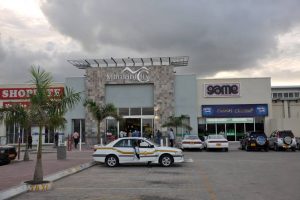 This is one of the popular malls that has everything under one roof, including bars, bank ATMs, Supermarkets, Cinema Halls, office spaces and apartments village (villa).

The place has the most expensive conference centres where famous National and international performances are conducted.

The place is so glamorous that everyone wants to spend their time and shop there. It has huge Parking Space and good security, but nothing is cheap in and outside the mall. 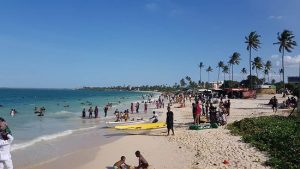 This is the biggest public beach in Dar es Salaam and Tanzania. The beach is popular and always flooded with people during holidays and on weekends.

There are bars and barbeques nearby and is a popular spot for people who need fried, grilled or roasted cassavas as they enjoy the sea breeze. Parking is available every weekend and in the evenings daily but security is minimum.

The beach is located on the shores of Indian ocean at the Toure Drive, 5 minutes away from the city centre and is about 2km long. 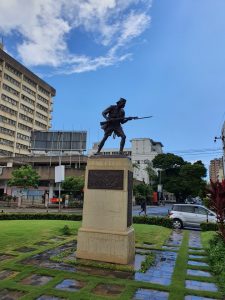 You can’t be a guest in Dar without getting a chance to see an actual Askari Monument.

Guests love it more than residents, probably because of the artistry used to make the Askari and of course, the picturesque garden. It is a symbol of the soldiers who fought British carrier corps in the first World War.

The monument is located at the City centre roundabout on Samora avenue opposite the junction between Maktaba Street and Azikiwe Street. 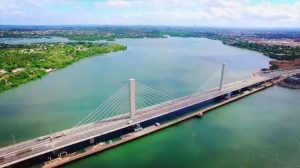 This is the first-ever bridge crossing the sea in Tanzania and probably the longest in Africa (Southern Sahara), offering attractive views at night.

The bridge joins Kigamboni District and Kurasini ward at Dar and has significantly reduced the commute time between these two areas.

Instead of waiting for a small ferry from a congested City to pass through  Kigamboni, trucks and use the bridge to ferry things from Kigamboni to the City and back. 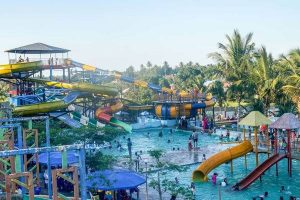 Fun city is located at Tuangoma, Kigamboni, about 45-minute drive from Dar ferry and less than 10 minutes drive from Mbagala and is ideal for kids as well as adults.

It has about 50 attractions including water games, swings, swimming among others that keep everyone busy all day long. It is located within a park and charges Tshs. 15,000/= for entry.

The place accommodates events, and also offers food, drinks and other pre-order services. If you are a religious person, they do have a small place for prayers.

The city has a variety of economic activities, despite the Government shifting its offices to the capital city, Dodoma. White-collar jobs are available in Masaki, City centre and Mikocheni areas whereby small enterprise offices recruit and operate in all sectors.

You can easily find a job from recruiting websites such as Brighter Monday, Zoomtanzania, Jiji, Radar recruitment, Empower, Everjobs among others. 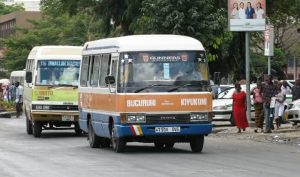 The city has more than 60 routes leading to most estates.

Most cars are mini buses and only big buses plying the kivukoni/ferry route are allowed to enter in the city centre. You will take about an hour to reach the city centre from nearby estates due to the heavy traffic in Dar, which peaks between 6:00 – 9:00 am and 4:00 -7:00 p.m. 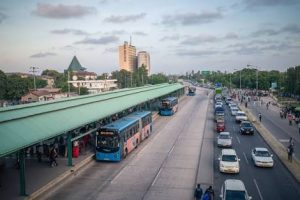 Mwendokasi (fast speed), which has been corrected as Mwendoharaka means quicker or faster and is the name given to the BRT lane in Tanzania.

BRT has been a relief for the car residents as they can now take a shorter time commuting.

It will take you about 30 minutes to commute from Mbezi/Kimara, Gerezani(Kariakoo), Morocco-City Centre/Gerezani(Kkoo) to City Centre on BRT, and also to use the special route from Gerezani (Kariakoo) to Muhimbili (National Hospital). 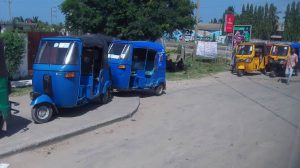 Despite the emergence of Public transportation, Bajaaj in Dar has been privately used in many places within Tanzania.

They are believed to ease a traffic jam as they can easily pass between two lanes.

They are mostly used in the city centre to Kariakoo (Gerezani), in places where daladala can’t reach, heavy traffic areas such as Makumbusho-Mwenge, Mbagala, or sub centres like Gongo la Mboto.

Sometimes, safety has to be considered when used outside the city centre due to the limited number of people. It is not recommended in remote areas and at night. 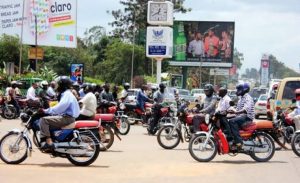 They’re everywhere. Bodaboda had been banned from the city centre, but due to the transportation challenges experienced during the coronavirus crisis, the City Council law was overruled and allowed them to enter the city centre.

The crisis came after the passing of the Level seating rule that prohibited Daladala from carrying excess passengers.

Most bodabodas charge from 1,000/=  depending on your destination, and of course, you have to wear a helmet before riding.

The city has private taxis which work mostly in the city centre and at the Airport, to serve passengers and City Centre residents who don’t know the city streets very well.

Though Uber and Taxify are available, locals recommend private taxis that find ways to evade the traffic. Their pricing model is however a bit tricky, as they charge you according to your looks. 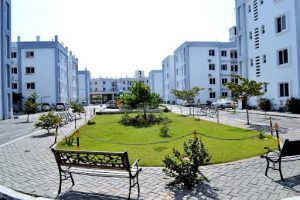 There are many government (NHC) houses and flats to rent or buy in Dar depending on your budget.

For rental houses, there are numerous Private properties to rent per room starting from 100k. When renting a place to live in, you either meet the landlord yourself, or Dalali will do that for you and charge an equivalent of a month’s rent as his fee. The safest places are closer to the city centre and are a little bit costly.

There are hundreds of hotels and lodges in the city centre, from Magomeni, Kariakoo, and some in the City Centre, Kinondoni and very few in Mbezi Beach, Ubungo and Kimara and loads of lodges in Sinza and Kijitonyama.

In conclusion, Dar is an amazing city if you can find what you need.

Don’t be mugged in Nairobi: Tips to stay safe from boda boda thieves