Africa does not need charity rather a win-win partnership and materialization of ‘all the promises made to Africa’ in compensation for the sacrifices agreed to protect humanity against global warming.

Speaking in New York at the United Nations Headquarters during the opening of the 76th session of the United Nations General Assembly (UNGA), the President of the Democratic Republic of Congo, Félix-Antoine Tshisekedi Tshilombo, called on UN member states to honor their word and shield mama Africa from the adverse effects of global warming.

“Africa does not need charity,” but constructive win-win partnerships to make better use of its collective national wealth and improve the living conditions of its people.” President Tshisekedi told the world, UN news desk reported.

The Congolese head of state noted that to cope with the negative impacts of climate change, the African continent will need $30 billion a year to adapt. This amount is expected to rise even further to around $50 billion by 2040.

“There are less than six weeks left before COP26 and nine years before 2030. For Africa, the year 2030 will be marked by a drop in GDP of up to 15 percent reduction in agricultural yields and a sharp increase in the risk of coastal flooding and in island countries,” said Mr. Tshisekedi.

As the world temperature continues to rise with each passing year largely thanks to western nations led by China and USA emitting tonnes of CO2 into the atmosphere, African nations are on the receiving end with floods, drought, fires, and diseases becoming more and more common. 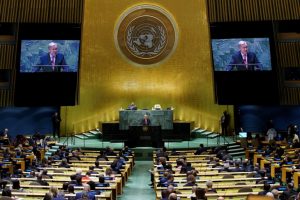 On Tuesday, the annual high-level discussions kicked off with several days of speeches from heads of state and government lined up. Climate change, COVID-19 and security are expected to dominate discussion during the annual gathering.

“I’m here to sound the alarm. The world must wake up,” Guterres said according to the Guardian.

Every man for himself and God for us all

While seemingly angry, Mr. Guterres pointed out the current gross inequalities in the global distribution of COVID-19 vaccines, with large majorities in the rich world already vaccinated while over 90% of Africans were still waiting for their first dose.

“This is a moral indictment of the state of our world. It is an obscenity,” the secretary general said.

Shot in the arm 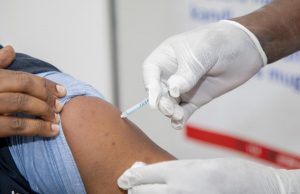 President Tshisekedi also joined other world leaders in calling for vaccine equity and stressed how the COVID-19 pandemic has threatened economic recovery and widened inequality across the globe.

He welcomed initiatives related to financing of the economies, in particular those of the G20 on the suspension of debt service and the common framework for debt restructuring, but for him, the $33 billion allocated to Africa “are insufficient in view of the immensity of its economic stimulus needs.”

In August, the word got a significant shot in the arm from the International Monetary Fund (IMF) after the financial institution set up the largest allocation of Special Drawing Rights (SDRs) in history—about US$650 billion. According to IMF Managing Director, Ms. Kristalina Georgieva, the SDR allocation will provide additional liquidity to the global economic system – supplementing countries’ foreign exchange reserves and reducing their reliance on more expensive domestic or external debt.

Last year, the UN held a virtual meeting because of COVID-19, but this year despite the pandemic still raging over 100 heads of state and government and several dozen ministers are slated to speak from the General Assembly podium during the high-level meeting which ends Sept. 27.