Namibia is a country that is located on the Southwestern coast of Africa, and borders Angola to the north, Zambia to the northeast, Botswana to the east, South Africa to the southeast and south and the Atlantic Ocean to the west. 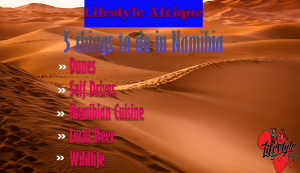 Sossuvlei means ‘dead-end marsh‘, and is home to some of the highest dunes in the world.

Dune 7 in Walvis Bay is the highest in the world, standing at a height of 383m. Big Daddy dune is the most popular among tourists, at 325m tall.

The dunes, also known as star dunes due to their ability to change shape as the winds blow, are found in the interior of Namib-Naukluft National Park.

They rise from the Atlantic ocean, mixing with red oxide to form unique red towers of sand. The best way to see these sand dunes is by using a 4WD and in the company of a tour guide to avoid getting stuck. To see the sand dunes, you will be charged 80 Namibian dollars at the entrance.

Tourists love this spot, especially at sunrise and sunset. Apart from the amazing views of the sand dunes, they get an opportunity to enjoy the popular sandboarding experiences at speeds of up to 80km/hr.

This is the largest site for ancient bushman rock engravings in Africa, and a UNESCO world heritage site.

It is popular with tourists who wish to learn about Africa’s most prolific displays of ancient rock art.

It is spread over a series of more than 16 individual sites, each exhibiting unique art.

One of the world’s oldest deserts

Namibia is named after one of the oldest deserts, the Namib desert, which stretches over 2000 km into Angola and South Africa.

Towards the East, the 43million-years-old wonder merges with Kalahari desert.

Scientists have found that the sand in the desert has existed for over a million years!

The second-largest canyon in the world

The Fish River Canyon in southern Namibia is one of the most visited tourist attractions.

After the Grand Canyon, this is the second-largest canyon in the world that is 160 meters long, 27 kilometers wide, and 550 meters deep.

It is a hikers’ joy to be able to walk on this red-coloured canyon that is believed to be over five hundred million years old. During the rainy season, you can see the fish river that forms a flash flood on the canyon’s floor. You will pay 80 Namibian dollars to explore this canyon, and an extra 10 dollars for parking.

If hiking isn’t your passion, you can catch great views of the canyon from the Namib desert’s sand dunes.

Have you visited Namibia before, and what did you love about the country? Share in the comments box.

Other contributors to this article: Pauline Nyumu and Rayna Jepkoech

This is why air travel in Africa is expensive