Hats off to Manu Chandaria

The Chair and CEO, COMCRAFT Group was honoured last week “for advancing opportunity and addressing critical needs in Africa through investments in healthcare infrastructure, secondary and higher education, poverty relief, and environmentalism.’’

Mr Chandaria was among five persons named as this year’s recipients of the Carnegie Medal of Philanthropy.

The honourees will receive their medals at a ceremony in New York in October. 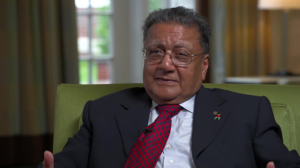 Besides entrepreneurship and donating money to different causes, Manu Chandaria has styled himself as a speaker on various issues, among them global peace.

He is Kenya’s patron of the Global Peace Foundation and a member of the Global Leadership Council. Mr Chandaria also sits on boards of several companies in Kenya and the region.

He is also a recipient of the Elder of the Order of the Burning Spear (EBS) award, a presidential honour conferred on him in 2003 by then President Mwai Mwai Kibaki “in recognition of outstanding or distinguished services rendered to the nation in various capacities and responsibilities”.

In 2015, President Uhuru Kenyatta conferred on him The First Class: Chief of the Order of the Burning Spear (CBS).

About Carnegie Medal of Philanthropy

Some of the past recipients of Carnegie Medal of Philanthropy include: the Bill Gates family, Rockefeller family, and George Soros, who has donated Sh3.8 trillion so far to a foundation that advances justice, education, public health and independent media.

{OPINION} Will Kenya get drawn into Europe’s woes on bees?