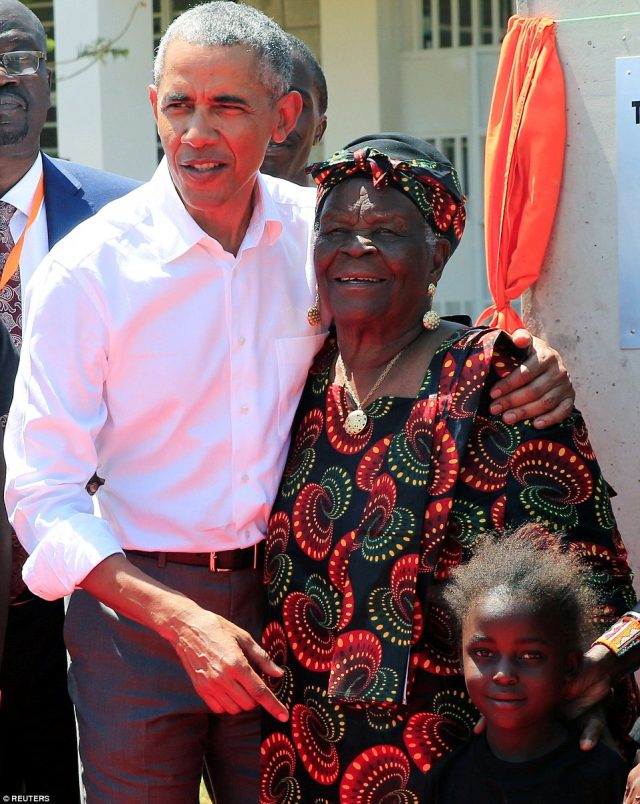 Ex-U.S. President, Barack Obama has joined millions of Kenyans in morning the passing of Sarah Obama. Obama took to his twitter handle to mourn the loss of his step-grandmother Sarah Ogwel Onyango Obama who died at a hospital in Kenya at the ripe old age of 99.

My family and I are mourning the loss of our beloved grandmother, Sarah Ogwel Onyango Obama, affectionately known to many as “Mama Sarah” but known to us as “Dani” or Granny. We will miss her dearly, but we’ll celebrate with gratitude her long and remarkable life. pic.twitter.com/avDY4f1PVu

Throughout her long life she loved education and way out of her way to support orphans access education. She set up Mama Sara Obama Foundation which helped provide food and education to orphans — providing school supplies, uniforms, basic medical needs, and school fees.

In recognition of her work, she was honored by the United Nations in 2014 and awarded the inaugural Women’s Entrepreneurship Day Education Pioneer Award.

In his memoir, “Dreams from My Father.” President Obama fondly referred to her as “Granny” and described meeting her during his 1988 trip to his father’s homeland and their initial awkwardness as they struggled to communicate which developed into a warm bond.

“Although not his birth mother, Granny would raise my father as her own, and it was in part thanks to her love and encouragement that he was able to defy the odds and do well enough in school to get a scholarship to attend an American university. When our family had difficulties, her homestead was a refuge for her children and grandchildren, and her presence was a constant, stabilizing force,” Obama wrote.

Sarah is survived by many sons, daughters and grandchildren.